3rd Stage of Development Hades: Cocytus – The history of Wonder Woman (not being) featured in the media

I think if you play geek god and watch it all history from above, DC kinda had a  a memorable live action TV Series for their “Trinity” characters per decade,  during the 50’s (superman) 60’s (batman) and 70’s (wonder woman)… all accompanied with their respective rise in popular merchandise and tie-ins. right?

The superman TV shows had the 1940’s Fleischer animated serial aired in syndication well into the fifties.  By 1966 when the bat-mania hit, it really pushed ABC to keep the tie ins and commission Filmation animated studios to work on segments based on the properties now televised in prime time properties. These meant a  Batman and Robin animated series to tie-in, and a superman series that included a Superboy segment with Krypto the super dog.

In fact these tie in series were so popular, that lead Filmation to develop yet another series with DC’s then most famous character. Wonder Wo… no, wait…  Aquaman! and eventually even some Flash, Green Lantern, Atom and Hawkman short series. Actually everyone BUT Wonder woman.

By te 60’s Wonder Woman has never been in the air… so in the 60’s is kind of un known territory to do a female centred action animated series. Specially if take a look at the way stories seem to work within Filmation, which was very standardised.

Watching just few of each, it becomes evident they used templates. There was the Batman template inspired from the live action TV shows, zany and campy. One sidekick and one crazy villain.  They had a Superman template based of the radio show and live TV counterparts with a stand alone hero, with secret identity fight Sci-Fi monster / evil genius of  the week.

Both these templates were worked for all other superheroes. And man, if they didin;t fit they wopuld make them. Not this means all their personalities are interchangeable ( even more than in the comics of the era) Their powers are also exchangeable, solo heroes can do pretty much anything superman can do solo: The atom flies and has super speed for example and Hawkman uses a ray gun that woks just as well as any heat vision along with flash who also exhibits flying and super strength. Those NOT using the Superman template are using the Batman template, and so they ALL have sidekicks, Flash has Kid Flash, Aquaman has Aqualad,  Even Green Lantern had to be created a sidekick so it would fill the template (Kairo the Venusian boy).

My guess, is that it is possible since there was no immediate predecessor to how to write wonder woman stories… there was no template for wonder woman animated shorts.  In closer inspection will reveal that actually they avoided heroines on their line up in general, Mera (Aquaman’s wife) makes a few, brief (and rather embarrassing) cameos in Aquaman, in a more of a Lois Lane damsel in distress type of situation. And Hawkman instead of borrowing the Batman template and having Hawkgirl as a sidekick uses the Superboy/Krypto template and has an eagle sidekick named Skreal.

Even when they did some Justice League episodes… there was still no Wonder Woman! Aquaman was only included in the title of the segments, but the fact wonderwoman wasnt even ther… well its just unbelievable. 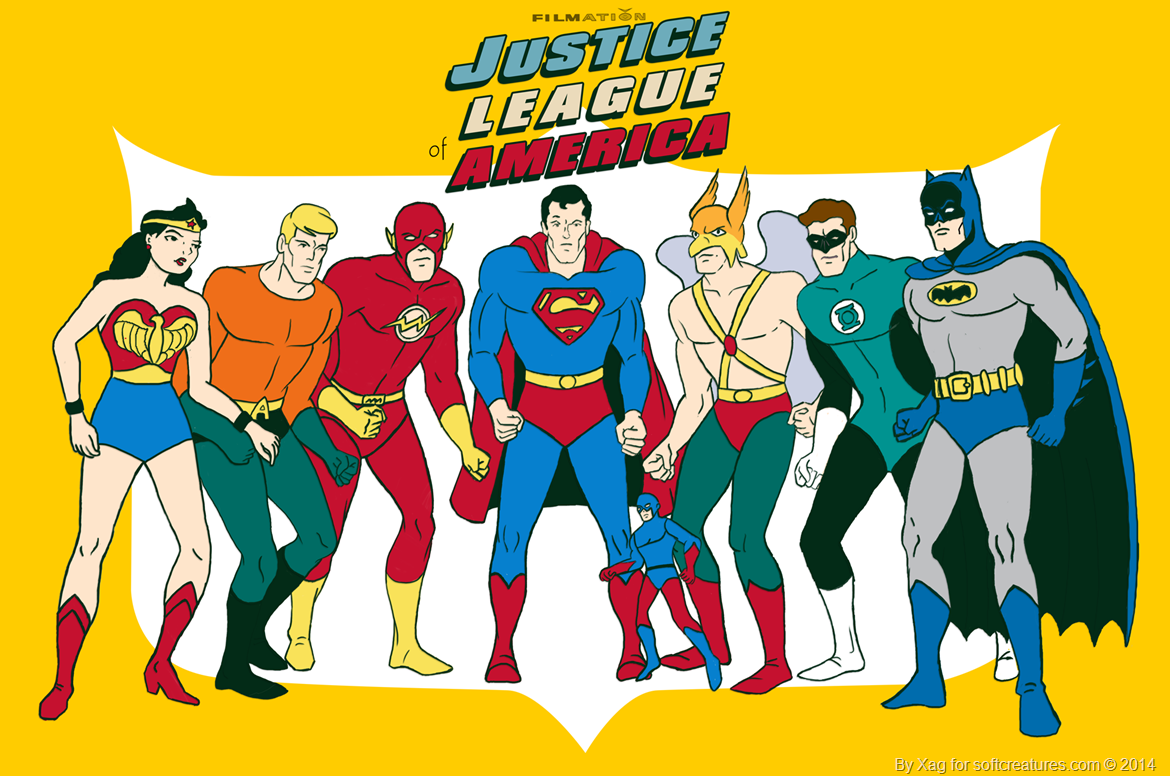 One can’t help but imagine endless ways they could have always just adapted one of their templates to Wonder Woman. Maybe wonder woman could have had wonder girl as a sidekick a la dynamic duo, or maybe create a Wonder Boy for her (oh my imagination). Maybe she could have a pet unicorn and fit the Superboy/Krypto template.

Interestingly enough, when they did the Teen Titan Episodes… they did include Wonder Girl (wtf?). She was arguably portrayed as the most competent and powerful member of the team. Unfortunately, she was also subjected to lots of “doll” and “chick” jesting. According to comicbook journalist Darren McNeal It seems a wonder woman series was in the plans. Allegedly there were pilots planned for not only wonder woman but Metamopho and Plastic man as well but with the Bat-mania being so catchy they decided to focus their efforts on batman alone.

Suggested evidence of this planned Filmation wonder woman pilot, seems to have made it to the View-Master Superheroes reel “Peril in New York”. 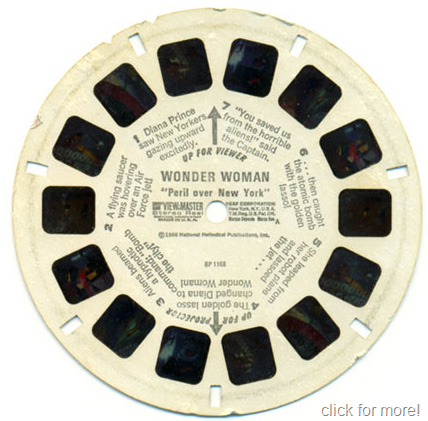 Filmation wouldn’t get a chance at animating the character until 1972 when she would guest star in an episode of the Brady Kids tie-in animated series.

(very gif-able moment) Man… She drops like a rock!

Evidence also suggests got over their cold feet and went on ahead with female action leads, but not having the DC license they made their own superheroes instead of borrowing DC’s. Filmation did get to do an animated Isis series, She-Ra Princess of power and even a Spiderman-like female hero called Web-Woman, so I guess they weren’t against doing super heroines in the long run,  it seems that for whatever reason Wonder woman just missed the chance again.

After the Live action TV series aired, seemed like it was only fair the Wonder Woman would have had an tie in animated series. But alas, it did not happen… In America, that is. Why, its anyone’s guess, the series was such a big deal overseas, the theme song was remixed and sold as a disco hit in France The theme song was sort of a hit in France and all the way in the other side of the world, Korean animator Kim Cheong-gi produced the Anime “Run, Wonder Princess!” 날아라 원더 공주 ( 走れワンダーコンジュ)

I’m not sure if it’s a serialised TV movie or an actual series, couldn’t find any episode list, just a “series opening”. True they didn’t bother acquiring an actual license. But really they barely bothering changing the character at all. She has the spin, the colours, and even has a crush a military man and astronaut version of Steve Trevor. She battles The Red Empire enemy of the series Taekwon V.

The anime had a VHS release, but aside from that, and not being very fluent in Korean (not that Google is very fluent either) there is very little info on it. Here a couple of interesting art I found. Including what seems production art and a 2nd volume of a manga where it seems she turned blonde and got a costume change. 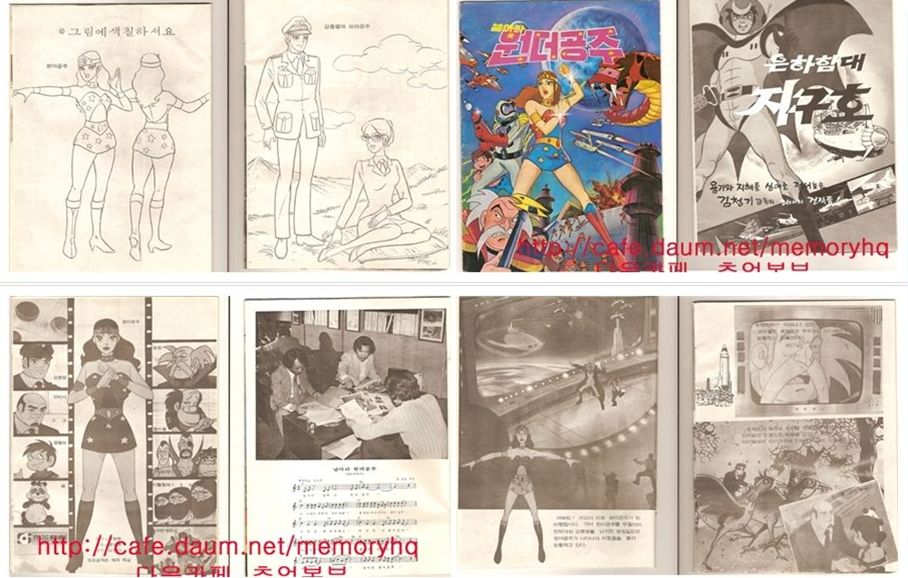 Wonder Woman wouldn’t make her first official ongoing cartoon appearances till the Super Friends premiered, and kept going for 9 seasons (1973-1986). But Superman was also being heavily promoted in the movies, and Batman batman had yet another solo tie-in animated show during the 70s which mean that during the 70’s both got twice the mediatic exposure. Even spider woman had an animated TV show that heavily borrowed on the success of the wonder woman TV shows.

Interesting fact, when the series needed the development of new teenaged sidekicks to accompany the justice league, it was made so that Marvin White, was actually recruited by wonder woman, as he was the son of the original Diana Prince. Meaning he is technically Wonder Woman’s protégé. 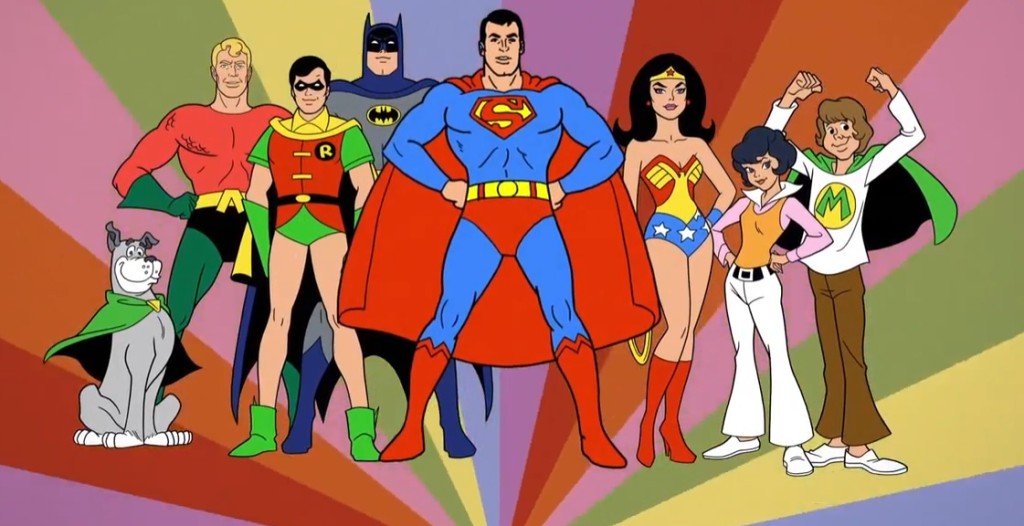